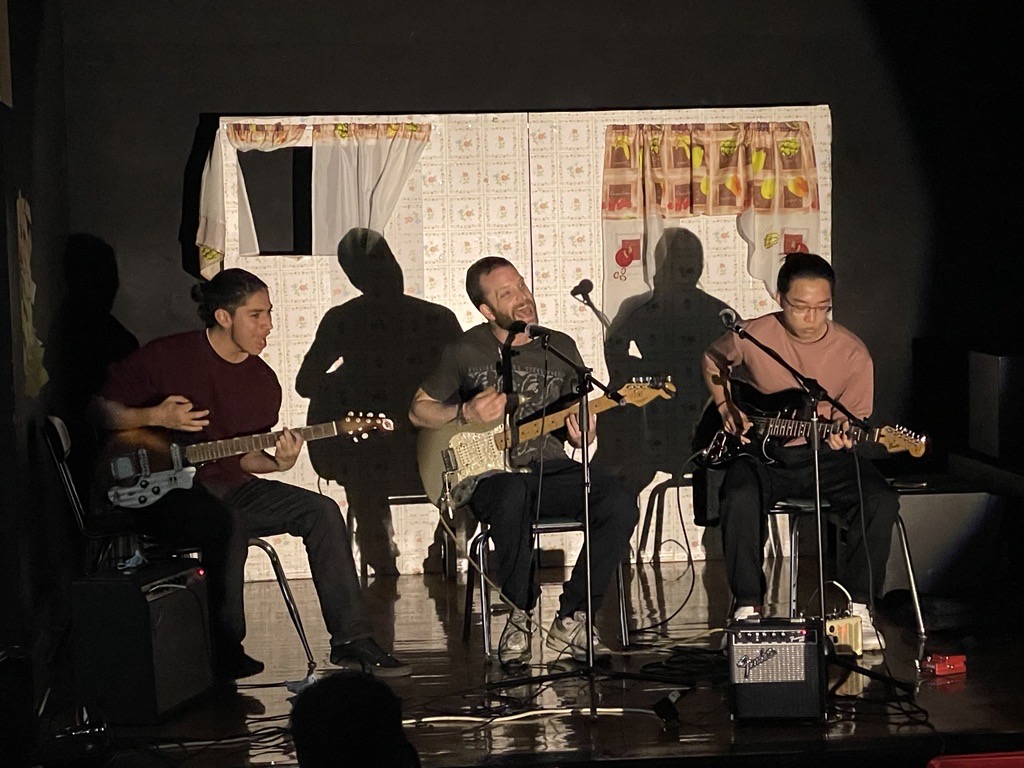 By Neha Jacob and Jesus Reyes

When most students hear the words “exit ticket”, they automatically assume some kind of writing activity to signal the end of class.

But “Exit Ticket” is also the name of a new Lincoln band, formed by English teacher Ian Henefield along with juniors Vitor Li and Ahmad Alisa. The band was formed in 2019 when Li joined the guitar club run by Mr. Andrus, Lincoln’s Media teacher. Mr. Henefield assisted in the club.

“They started small, now look at them. They are famous,” Mr. Andrus said. “They started off with this club, they learned to play more and they played in open mic nights which helped them broadcast their voices more.”

The Covid-19 pandemic restricted the duo from practicing together, but they were able to recruit Alisa during this time. “Exit Ticket” was born.

Mr. Henefield believes it was necessary to form this band as a way to give students a creative platform and environment to show who they are through music.

“It was born out of a need to allow students to express themselves creatively,” Mr. Henefield said. “Oftentimes students have so much work that sometimes it’s important to do something that has no boundaries. So, it was really kind of an outlet for people to work on music.”

The band has now produced its first song with a similar Lincoln theme – “Do Now”. It was a special moment for the trio.

“Making our first song was my favorite moment. It took so long to get it right,” Ahmad said. ”Many sessions were spent developing chemistry and making up songs that were dead ends and when we finally stuck to something and completed it, it felt so relieving and like jolly because we thought we’d never get something done but we did and now we’re on a creative roll!”

It is the chemistry and connection between the players that makes the band so special. Each session is a unique experience.

“When I play for the band, I feel like I’m doing a beautiful experiment in a lab,” Ahmad said. “We all mix our playing styles and create music that is with trial and error. The best feeling is the harmony. When someone is playing and you can play with them and create something better… it’s a beautiful concept.”

While the band only has a single track, the Lincoln community can expect to see more from Exit Ticket in the near future, as the band strives for quality over quantity. As much as possible, the students want to maximize their talents and potential by giving all the time they have to the music.

“My goal is to produce as much music as I can for the band, not just any music though: the best music I can,” Ahmad said. “I try my best to make the best songs or guitar riffs I can so we can continue to grow our set list and maybe eventually drop an album of some sort.”

By Citlali Lopez and Staff Semerik When the Covid-19 pandemic forced Lincoln’s high school musical “Into the Woods” to be...