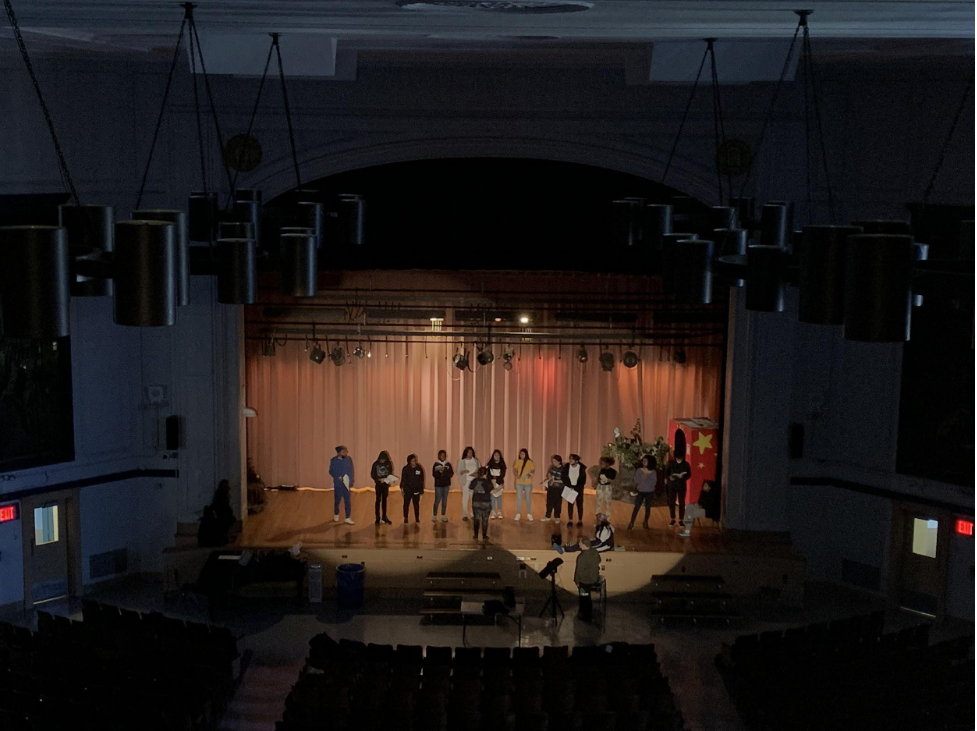 By Citlali Lopez and Staff Semerik

When the Covid-19 pandemic forced Lincoln’s high school musical “Into the Woods” to be performed remotely two years ago, senior Kymara Saunders, who played the role of the witch, was disappointed.

“It was really difficult because you can’t really do a play virtually,” Saunders said. “It’s easier to work with people and it’s kind of impossible to put on any sort of play remotely.”

“Into the Woods” incorporates the storylines of many popular fairytale characters such as Rapunzel, Jack and the Beanstalk, Red Riding Hood, and Cinderella to tell the story of a baker and his wife and the witch’s curse that prevents their wishes from coming true. With songs written by Stephen Sondheim, the musical will be revived on Broadway this summer.

Lincoln Theater Director Ellen Fabbricatore first hoped to put this play on in May 2020. Due to the lockdown, her theater students were forced to perform the play virtually via Zoom. The virtual production was created with several clips of students reciting their lines. The videos would then be composed, edited, and formatted.

“They recorded themselves, then they sent in their videos, and we synced them together,” Mrs. Fabbricatore said. “It came out really nicely, it was a very complicated process, but we were so happy with it.”

Music teacher Mr. Pearce remembers how complex and lengthy the process of putting the songs together was for the virtual production.

“We cut out a lot of parts, we only did a couple of songs,” Mr. Pearce said. “Then we had to piece together each individual voice with programming.”

For Mrs. Fabbricatore, memories of the virtual production are tinged with sadness as she recalled students who did not get a chance to perform the play in person, due to the pandemic.

“They did actually get to do something, even though their life was so sad. A lot of them were seniors, they had been working with me for four years. They finally got the part of their dreams.”

Last month, the production returned in person and with it many of the familiar aspects of theatre. Mask restrictions were lifted in March during ongoing rehearsals for the play. Many of the students involved welcomed with relief these changes from virtual performance.

“I think this is definitely better than virtual,” junior Kayla Buchanan, the musical’s senior stage manager said. “They’re [the actors] together, and able to have good communication, something needed in these things that involve many people.”

Theater is heavily dependent on emotions and expression, as well as working in unison, elements that were missing from the virtual performance. Performing live freed the students to act with a far greater range of expression, especially through movement and physical interaction with each other in the same space.

“Into the Woods”, like many musicals, has a large cast of performers. Senior Daneel Dushin, the production’s sound design manager, explained that this presented its own challenges.

“We’re all meeting each other, there’s more moving parts, everything’s coming together so we can get everything straight.”

The students were nervous and excited about the first performance in front of an audience.

“I’m looking forward for this to come altogether,” Junior Iryn Lincoln, a member of the Set Design team, said.

Junior Jackie Bartoline, who played the characters of the Cow and Granny, was modest in their ambitions for the production. “I really hope you all enjoy the show”, they said. “I wanted to try and make it sound funny.”

After all that has happened with the pandemic and adjusting to school life again, and after endless rehearsals, in dance, chorus, and acting, the play returned live on May 26, 2022 to great success and plaudits from a large opening night audience.

By Neha Jacob and Jesus Reyes When most students hear the words “exit ticket”, they automatically assume some kind of...